And What About Flossing – What’s the Best Way to Do That?

Here at your Dentist Epping, we are always saying you should brush and floss your teeth every day, but we haven’t talked about what’s involved in flossing your teeth.

It’s an awkward thing to do, especially if your teeth are not well spaced. Sometimes, it can be difficult to slip the flossing thread down between your teeth.

Did you know there are a few different ‘tools’ for doing it with in addition to the flossing thread you are probably used to? If the conventional flossing thread just doesn’t seem to do it for you, a small bracket is available that holds the flossing thread, and there’s also a special device that spurts a tiny jet of water. Talk to us at Dentist Epping if you’d like to know more about these alternatives.

Floss at least once a day and do it before, not after, brushing your teeth. That way, the toothpaste can get further into the gaps between your teeth when you are brushing.

Brush your teeth at least twice a day, so once it will be preceded by flossing and once or twice, it won’t.

Now for the nitty-gritty. Wrap 30-40 cm of flossing thread around a finger on each hand, leaving your index finger free so you can use it to help angle the thread between each pair of teeth. If that doesn’t seem to work for you, you’ll have to wrap it directly around your index fingers.

Wrap more flossing thread around the finger on one hand than on the other, so you can unwind it gradually and use new thread as you go.

Once the thread is in position, saw it slowly and gently towards your gums between a pair of teeth. Careful! You don’t want to wack the gums with force.

Floss down both sides of the triangle shape between your gums and teeth.

It turns out that brushing cleans only 60% of your teeth surfaces – and the other 40% comes from flossing! That’s a big percentage, so you want to floss thoroughly.

If the flossing makes your gums bleed a little, don’t worry! After 1-2 weeks of regular flossing, the bleeding will stop.

Your children’s teeth need flossing too – and obviously, you will need to help them. Flossing takes a lot of manual dexterity! The easiest way is to stand behind them and lean over their head so you can see into their mouth for the flossing. If they tilt their head back, that will help.

We at Dentist Epping, as well as your smile, will delight in your well-flossed teeth!

Which is better – composit... 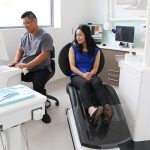 What are the white spots on ... 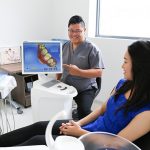 We’ll listen to your concerns and offer you straightforward solutions.